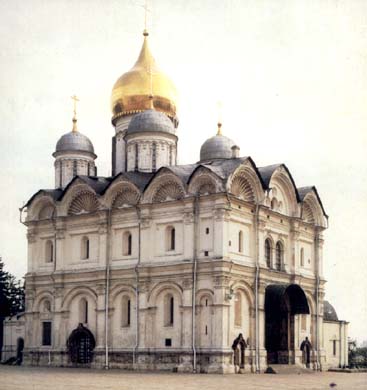 The Archangel Cathedral was built in 1505-1508 by Italian architect Aleviz Novy on the place of a small white-stone cathedral of the XIV century. The cathedral is devoted to archangel Michael, the protector of soldiers and rulers in their feats of arms.

From XIV to XVIII century the cathedral was a burial place of Moscow Princes and Tsars. The unique dynastic necropolis houses 46 tombs. At the southern wall there are the tombs of Ivan Kalita (Money-bag), Dmitry Donskoi and Ivan III. At the northern wall there are the tombs of Princes fallen into disfavour. The first Russian Tsar Ivan the Terrible was buried in the tsar's reliquary in the altar part of the cathedral. The tombs of Tsars from Romanov dynasty are located near the pillars.

The cathedral is adorned with a majestic ensemble of wall-paintings of the mid XVII century. A unique point is the circle of ideational portraits of princes buried in the cathedral. The theme of glorification of the state power sounds in the depictions of Moscow rulers' Saint ancestors.

On the cathedral's pillars there are images of Kiev Prince Vladimir, Princess Olga, Andrei Bogolyubsky, Alexander Nevsky and his son Daniyl, who founded the Moscow dynasty.

The four-tiered iconostasis of the Archangel’s Cathedral was created in the second part of the XVII century. It is crowned with carved "Crucifixion".

The cathedral's icon "Archangel Michael with glorious works", a unique monument of the heroic epoch of the Battle on the Kulikovo Field created at the edge of the XV century, is of special interest.