the Assumption Belfry of the Moscow Kremlin 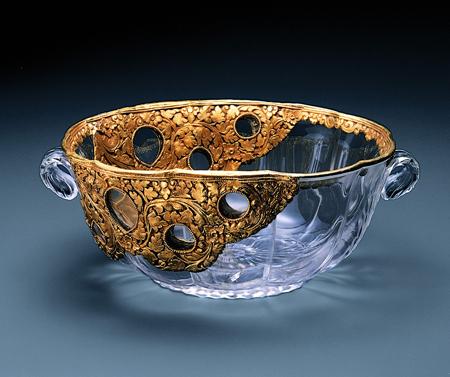 The exhibition, organized under the patronage of Sheikh Sabah IV Al-Ahmad Al-Jaber Al-Sabah, the Emir of Kuwait, is the first cultural project in Russia so vividly depicting Mughal-period jewelled arts of Kuwait. The collection of precious artworks of the Mughal rulers - descendants of the XIVth-century Mongol conqueror Tamerlane (or Timur) - has been forming by the royal family al-Sabah during over 40 years and then transferred to the possession of the Kuwait National Museum. It survived the vicissitudes of the 1990 Gulf War, when much of it was removed from Kuwait and transported to the Iraq Museum in Baghdad. Most of these items were recovered and returned to the country but some of them are still missing.

Unsurpassed craftsmanship and reputation of Indian goldsmiths goes back to ancient times. The jewelled arts, having been highly developed in the Indian subcontinent, flourished in the XVIth-XVIIIth centuries. The mixed cultural traditions of the Indian art are reflected in the rich range of motifs and styles of Mughal jewelled artworks, presented at the exhibition. The exposition includes more than 250 exhibits, which range from rings, necklaces and other personal adornment to jewelled masterpieces of armoury, interior decoration and tableware. All of them reveal variety of techniques mastered by talented Indian artists and craftsmen in the Mughal period, especially the enameling, inlaying, hammered precious-metal relief, engravings on the backs of jewellery items and gem-setting technique known askundan (in which pure (24-carat) gold foil is fused at room temperature around gemstones). Among the highlights of the exhibition are a historically important spinel (ruby-like gem) inscribed with the titles of multiple imperial owners from several Islamic dynasties.

This exhibition is divided into thirteen sections of thematic and technical character, following different types of jewellery art. Themes of the display range from varieties of India's stone settings through sublime hardstone carvings and precious-metal inlay to celebrated enameling, gold-inlaid steel and carved gemstones. Other sections are devoted to hammered precious-metal arts, sculptural qualities and, for example, the presentation of the largest collection of inscribed royal gemstones outside the Iranian National Jewels Treasury.

Such a dazzling display with its art-historically important pieces, representing the period of several imperial reigns, as well as the sumptuous and refined courts of the Deccan, in the southern part of India, shows grand imperial vision, refinement, and opulence of the Mughal rulers of India (1526–1858). Today, the exhibition, which has been also on view at several museums of Great Britain and USA, gives an unprecedented opportunity to experience the luxury and splendour associated with the Mughal Empire here in Russia.