Front Hall of the Armoury Chamber

Organized by:
the Moscow Kremlin Museum, Royal Armoury in Stockholm 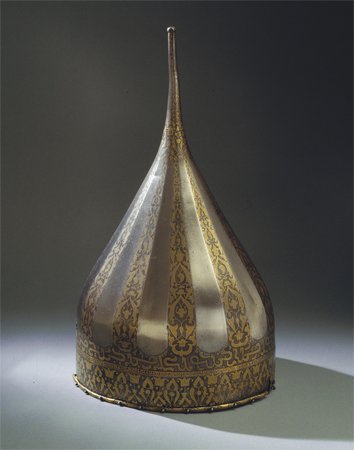 The Royal Armoury in Stockholm is the oldest museum of Sweden with a collection containing masterpieces of jewellery making and weapon art, i.e. royal treasuries, arms and armour of high historical and cultural value.

One the most distinguished exhibits of the museum is the helmet of Russian Tsar Ivan IV. It served as an evidence of ancient historical epoch and is worthy of particular attention through its interesting destiny.

The helmet is forged of steel and decorated with embossing technique and gold notches. It has a pointed top with a spike for affixing a yalovetz flag. In records of the XVIth-XVIIth centuries such headgear was referred to as shelom or sholom helmets.

The helmet, besides being perfectly functional in shape, is at the same time exceptionally decorative. Its surface is divided into alternate narrow sections-lobes, enchased with flowers and floral designs in gold. Its crown is decorated with ornamental bands notched in gold, one of which bears delicate pattern imitating Oriental inscriptions. Style of the helmet's decoration, similar to ornamentation of Turkish weaponry, indicates the workmanship of Russian maker, who mastered the art of damascening and inlaying with gold.

Between the two ornamental bands, arranged around the crown, a narrow inscription in the Old Russian language runs as follows: "SHELOM OF PRINCE IVAN VASILYEVICH THE SON OF GRAND PRINCE VASILY VASILYEVICH OF ALL RUSSIA". According to it researchers can suppose that the helmet was executed before the year 1547 - the time when Grand Prince of Moscow Ivan Vasilyevich assumed the title of Tsar.

There are several versions of a legend telling about how this helmet, having been executed in the Armoury Chamber of the Moscow Kremlin, became the exhibit of the Royal Armoury collection in Stockholm. It could have been captured during the Time of Troubles of 1611-1612 and then delivered to Poland, Warsaw, to King Sigismund. In 1655, when military troops of Poland were defeated by the Swedish army, it could have been transferred from Warsaw to the Royal Armoury in Stockholm as an expropriated trophy.

According to another story the helmet fell into Swedes' hands in 1574 during the battle near the Lode castle in Estonia, when Swedish troops gained a victory over the Russian army. A lot of trophies were captured and delivered to Revel with a solemn ceremony. For many centuries precious Russian helmets, armours, shields and axes were carefully preserved in Armoury Treasuries of King John III and his brother Charles IX of Sweden. Therefore the history of such an outstanding exhibit, having been inextricably intertwined with fate of several nations, reveals the course of European history.