Anteroom of the Armoury Chamber 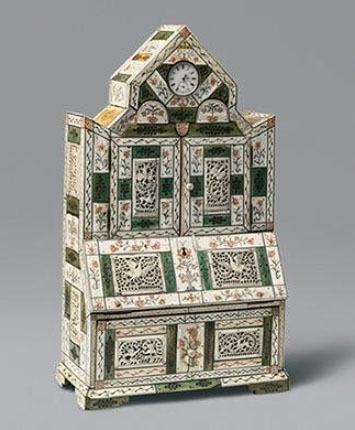 The exhibition presents a part of artworks donated to the museum from the Karisalov family's collection, revealing the diversity of bone carving art in Russia in the 18th-19th centuries. Following a tradition of the Russian pre-revolutionary philanthropists, members of the Karisalov family did not only gather a remarkably comprehensive and outstanding collection of the Russian bone carvings and studied the art of bone carvers but took care of its fate as well by bequeathing it to the museum.

The earliest items on display are caskets made of mammoth tusk, dating from the first quarter of the 18th century. They bear relief carvings, ornamental patterns and images modelled after the engravings from the book "Symbols and Emblems", which was published in Russian in 1705 on the order of Tsar Peter the Great.

The core group of objects includes works from the 18th century to the first half of the 19th century created by Kholmogory masters, who skillfully combined bone carving traditions with new trends of the epoch. Jewellery boxes and caskets, faced with bone plates of different colours, were decorated with relief images based on European engravings. Forms became more diverse - in addition to chests, masters of Kholmogory created desk cabinets, which thoroughly replicated European bureaus and secretaries. Since the mid-18th century, carvers creatively reworked the popular Rococo motif of a shell, which led to the creation of pierced, carved ornaments that adorned various pieces made of bone. With the onset of classicism, stylized shell ornamentation got replaced by graceful net-like patterns and variations arising from perforated geometric motifs with floral garlands that retained tracery and gave a sense of lightness to the boxes and mirrors they adorned.

The works of the bone carvers represented contemporary historical events as well. The exhibition demonstrates decorative bone plates with carved portraits of emperors and empresses, inspired by various engravings and medals. Besides, Kholmogory masters worked on three-dimensional sculptures, creating miniature reproductions of monumental pieces of art such as a copy of the Peter the Great monument by E.M. Falconet, presented at the exhibition.

Religious works form a special section at the exhibition. Icons produced in Kholmogory in the 18th-19th centuries were remarkable for their distinctive style. Carvers made a relief composition on a board covered with fabric, foil, bone or horn plates, in accordance with the desired theme. Twisted acanthus leaves, chain strips and intertwining bands - typical Kholmogory ornaments were often used in the décor of the icon covers. Masters created sculptures to a lesser extent, what makes compositions "The Good Samaritan" and "The Sacrifice of Abraham" quite rare.

The Moscow Kremlin Museums express their sincere gratitude to the Karisalov family for donating the collection that vastly expands the museum collection of bone carving.

The exhibition works from 10:00 to 18:00 daily except Thursday, in the anteroom of the Armoury Chamber.

Entrance fee included in the price of the ticket to the Armoury Chamber:

Tickets can be purchased:

Exhibition "Russian Bone Carving Artworks of the 18th-19th Centuries. Gift of the Karisalov Family"
up
We use cookies on our website
By continuing your visit to this site, you accept the use of cookies and other technologies to ensure the best possible use of our site and for web analytics.