The Front Hall of the Armoury Chamber

Organized by:
The Federal State Agency on Culture and Cinematography, FSI "The State Historical and Cultural Museum-Preserve "The Moscow Kremlin", the Foreign Intelligence Service of the Russian Federation 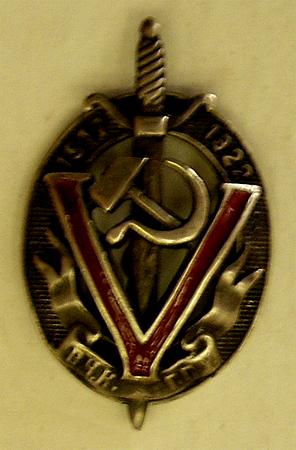 On December, 20, 2005, the Foreign Intelligence Service of the Russian Federation celebrates its 85-year Anniversary. This day, in 1920, Felix Dzerzhinsky signed a historical order no. 169 on creation of the Foreign Department of VCHK - foreign intelligence, which was lately transformed into CVR RF. The success of the foreign intelligence service is mentioned seldom as its activity is possible in complete secret.

However, in course of time, there appears an opportunity to tell about some facts of the history of the foreign intelligence service and people, who had made an eminent contribution to the safety of our Motherland.

Together with state decorations, in any professional community departmental decorations are particularly valuable as a sign of professional honour. The display in the Armoury Chamber is dedicated to the decorations of the Foreign Intelligence Service as well as to some eminent intelligence officers, who were decorated with the latter.

As the foreign intelligence of our country appeared and functioned belonging to the bodies of the national safety, its higher departmental decorations were also honourable decorations for so called "fighters of the invisible front".

From the very first days of existence of VCHK there functioned the system of departmental decorations for encouragement of the staff for successful realization of special missions and execution of particular commissions.  On the initial stage, it included decoration with premiums, letters of honour and letters of gratitude on behalf of the Presidium of VCHK. Later on, the most deserving officers were decorated with weapons , gold or silver watches and cigarette-cases with inscriptions "for ruthless fight against contrrevolution", "for self-denying chekist work", "for successful execution of an operative mission". The institute of departmental decorations of the bodies of the national safety developed and improved.  In July 1923 on the order of the Collegium of  GPU there was worked out the highest decoration - the pectoral sign "Honoured worker of VCHK-GPU" ("Honoured chekist").

In November 1932, by the 15-year Anniversary of the bodies of VCHK-OGPU there was accepted the Statement of a new pectoral decoration and determined its statute. In connection with the reorganization of the national safety bodies and its including into the National commissariat of the internal affairs (NKVD) of the USSR, in November 1940 the title of the "Honoured worker of the VCHK-OGPU" was replaced by the title "Honoured worker of the NKVD".  For particularly eminent officers there was created the pectoral sign "Honoured officer of the national safety".  Services of the officers, including intelligence officers, were decorated with various jubilee decorations.

Within the latest ten years, the administration of the FIS of Russia worked out an additional system of encouragement including decoration of the officers with jubilee breastplates and departmental  medals.

For many years, the officers of the Foreign Intelligence did their best in fighting at the "invisible front". In the fighting there were heroes, which would be known to the society many years after. However, the modest sign of the professional honour on civil suit can tell about contribution into the Motherland's  safety more than words can say.