Organized by:
Federal Agency for Culture and Cinematography, Embassy of the Austrian Republic, Kunsthistorisches Museum,  Vienna, the State Historical and Cultural Museum "The Moscow Kremlin". 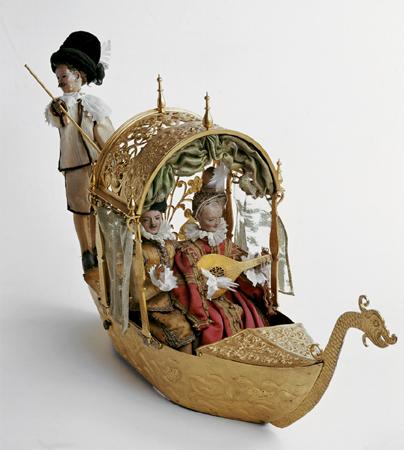 Exhibition in the Assumption Belfry of the Moscow Kremlin continues the long-term programme "Royal and imperial  treasuries in the Kremlin", dated to the 200th Anniversary of Moscow Kremlin Museums.

First time in Russia, the new Kremlin exhibition presents over thirty unique artworks from Cabinets of Arts and Wonders in the Ambras Castle near Innsbruck and in Vienna - rarities of famous collections of Archduke Ferdinand II (1529–1595) and Emperor Rudolf II (1552–1612).  These rulers were admires and collectors of exotic, unusual and rare things, brought from far exotic countries opr executed in European lands.

In the XVIth and XVIIth centuries, the Habsburgs played a leading role in Europe. They both ruled as an Austrian dynasty (kings in Hungary and Bohemia, archdukes in Austria etc.) and became kings and emperors of the holy Roman Empire.

The Habsburg Cabinets of Arts and Wonders preserved items, brought from many corners of the world by Spanish and Portuguese missioners and conquerors, who became discoverers. Every new acquisition widened their idea of the world.  Rarities and unknown objects became the point of desire.

In the XVIth century, tournaments were a necessary part of any celebration. Gorgeous and ceremonial exhibits from workshops of the best weapon-makers are on display in the Kremlin. Cabinets of Arts and Wonders, created by Archduke Ferdinand II and emperor Rudolf II are wonderful examples of universal collections.

Nowadays, Moscow Kremlin Museums give all the visitors a bright opportunity to get acquainted with legendary pages of European monarchies' history.

One of the most interesting exhibits is painting "Vertumn" by Giuseppe Archimboldo. It is a depiction of Emperor Rudolf II in the image of Vertumn, ancient Roman God of changes. The true masterpiece by illustrious maker has been brought to Moscow from the collection of the Swedish Skokloster Castle.

Information about the Castle is available on www.skoklostersslott.se

The exhibition has been organized with the support by OAO AKB "Rosbank".