The exhibition hall of the Assumption Belfry of the Moscow Kremlin

Organized by:
The Moscow Kremlin Museums, the State Hermitage museum 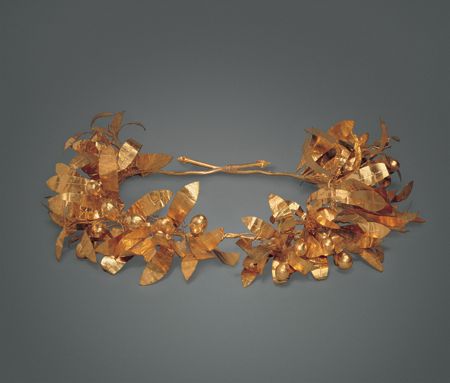 The exhibition, placed in the exhibition hall of the Assumption Belfry, represents the precious masterpieces from the Treasure Gallery of the State Hermitage museum, which nowadays consists of two sections. It has become a peculiar present of the St Petersburg Imperial jewellery collection to the Kremlin Tsar's treasury.

Within the display, several stages and varieties of the collection formation are revealed. The section, dedicated to the antique archaeology, includes archeological finds from the northern Black Sea coast, as well as gifts, purchases from different private collections, received after the Revolution had happened. The golden olive-crown, ring, decorated with scarab, goldsmithery, i.e. earrings and necklaces, were artistically done in the IVth-III century B.C. to excite our unstinted admiration in the XXth century. Artworks from the Tobolsk collection of Peter I, granted to the Tsar in 1716 by the Siberian governor M. Gagarin, form the basis of the earliest archaeological collection in Russia. Within the display you will see golden pendants, decorated with openwork embossment, bracelets, embellishment of the horse ceremonial harness.

From the earliest times the treasure-store of Russian Tsars contained works by the skilled craftsmen of the East: gold utensils and vessels, jewellery, arms and armour sprinkled with precious stones - rubies, diamonds, emeralds and pearls, and embellished with magnificent enamels. The collection of the Indian 17th-century jewellery, articles from the time of the Great Moghuls, some wonderful Chinese items of the 17th and 18th centuries, Indian, Persian and Turkish swords and daggers in gold and silver scabbards are exhibited as cultural artifacts.

The exposition continues with the Western European and Russian goldsmithery of the XVth-XXth century. The cameo bearing a portrait of Charles VII of France, Spanish golden pendant "Caravel" of the XVIth century, silver casket, created by the craftsmen of Germany in the XVIth century, are the earliest artworks of the presented period. The exhibited jewellery masterpieces of such highly skilled St Petersburg masters as Jeremie Pauzie, Jean-Fransois Xavier Boudde, Johann Gottlieb Scharff, Jean-Pierre Ador and the Theremin brothers reveal the peculiarity of the jewellery's technique, styles, materials, inhering in different art schools. Worthy of particular attention are the snuffboxes, golden watch on a chatelaine, cameos of precious stones, memorial items, which relate to Empress Anna Ioannovna, Catherine II, Emperor Alexander I and Nicholas I. The jewellers' art in St Petersburg of the late XIXth - early XXth century is associated with Carl Faberge and his workshop. The "Copy of the Imperial regalia" exemplifies a distinguished style of goldsmithery of that period.

Such a large exhibition, with artworks of true workmanship, possesses a historical and cultural significance and helps the visitors to get acquainted with the world-famed masterpieces from the Treasure Gallery of the State Hermitage museum.