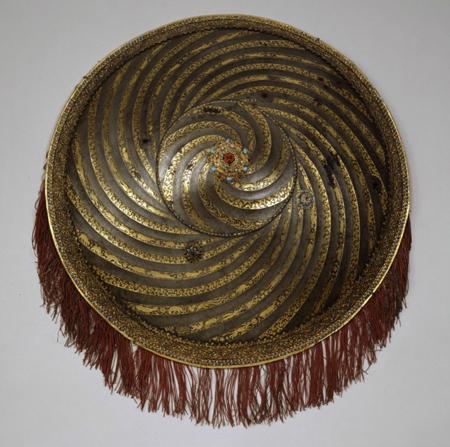 At the exhibition the Moscow Kremlin Museums present oriental artworks, granted by the Ottomans and Safavids to Russian Tsars through large embassies, diplomatic missions, and trade delegations. The collection is unsurpassed among those of other museums in the world. It comprises ceremonial arms and armour, remarkable horse trappings, artworks of gold and gems, precious fabrics and regalia, intended for most important court, state ceremonies and gala receptions.

The earliest articles of the display represent culture and art of the Golden Horde. For example, a signet ring by makers of the XIVth century, relating to a legend about metropolitan Alexius and the Tatar Queen Taidula, healed of blindness; a helmet with mask of the XVth century, which reveals ancient traditions of wandering tribes.

The highlight of the exhibition is the section with ambassadorial gifts and commercial imports of the XVIth-XVIIth centuries from Iran and Ottoman Empire.

Cold steel and armour by Iranian makers, richly decorated with all types of artistic metalworking and inlaid with precious stones, are remarkable for interesting system of ornamentation and decor. One of the most noteworthy masterpieces of Iranian workmanship is the XVIth-century shield, forged from a single sheet of damask steel. Its surface is enchased with concave strips, damascened with gold and adorned with figurative ornament. The collection also includes ceremonial items, such as the staff of Patriarch Filaret, buffalo horn enchased in gold; horse trappings and embroidered textiles, for example embroidered caparisons, which were used for gala royal outings.

Exhibits representing Turkish goldsmithery and applied arts includes arms and armour, ceremonial horse harness, decorative articles of precious metals and gems, textiles and tableware, - remarkable gifts, brought to Russia by merchants and ambassadors. Most of the items are relics of the Turkish goldsmithery, which flourished in the XVIth-XVIIth centuries. Examples of Turkish defensive and military weaponry are remarkable for their extraordinarily fine decoration and the richness and variety of artistic ornament. Exhibit of exceptional interest is the helmet of Prince Fyodor Mstislavsky called a Jericho cap, representing a particular type of ceremonial helmet, widely used in Russia in the XVIIth century. Displayed items of Turkish equestrian paraphernalia (i.e. saddles, stirrups, bridle and pectoral trappings, caparisons) were extremely valuable and held in high esteem in the Tsar's treasury.

Major part of the Turkish jewellery collection, preserved in the royal treasury, reveals workmanship of the Istanbul makers. Some articles of semi-precious stones are also on display, i.e. a ball-shaped cup of jasper, brought to Tsar Mikhail Fyodorovich by the Greek merchant Yuri Panagiot in 1632, a cut-glass tankard, delivered to Russian court by Cyril, Patriarch of Constantinople, in the same year, a scent-bottle of 1656 and a an inkwell of lazurite for a reed pen. Objects crafted in gold and embellished with precious stones, or those made of semi-precious stones and inlaid with gold and gemstones were predominant among the goods brought from the Ottoman Empire. Some decorative items, i.e. plaques and gemstones, were considered to be a fine furnishing for clergy vestments and church utensils, as it seen in decoration of the monstrance from the Kremlin Annunciation Cathedral, and ceremonial saddle by makers of the Stables Office.

Precious artworks by oriental makers, served as ambassadorial and commercial tributes to Russian rulers, give the idea of diplomatic and trade traditions of the period. "This exhibition explores the reasons for these extraordinary gifts, their artistic and cultural impact, and the aesthetic and ceremonial etiquette they inspired, one that became a defining characteristic of the Russian court and in the XVIIth century".